Racieli Andrada was born and raised in Kahului, Maui. She graduated from Maui High School in 2014 and is currently working towards a B.S. in Civil Engineering at California State Polytechnic University, 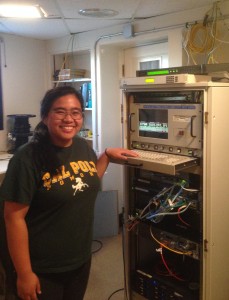 Pomona. Her ultimate goal is to earn an M.S. in Structural or Environmental Engineering and return to Hawaii to be a part of future development. Through Racieli’s involvement with the Society of Women Engineers, American Society of Civil Engineers, Engineers Without Borders, and the College of Engineering as a Women in Engineering Ambassador, she has had the opportunity to surround herself with peers and professors who will be instrumental in her academic journey and success in engineering. In her spare time, Racieli enjoys being a freelance photographer for the school newspaper, going to Disneyland, and exploring Los Angeles.

The Zwicky Transient Facility (ZTF) is a wide-field survey camera used to study the astrophysics of transient phenomena such as supernovae, variable stars, and solar system bodies. The wide field of view provided by the 48-inch (1.2-meter) Samuel Oschin Telescope allows scientists the opportunity to find rare transient phenomena by surveying the maximum volume of the universe per unit time with a preference for nearby objects bright enough to follow up with spectroscopy. To maximize the fraction of time spent observing, the time to slew between fields must be kept below the 10 seconds required to read out the image sensors for most slews. The purpose of this project was to determine the motor characteristics required to achieve this level of performance. Dome specifications, including dome weight and radius, motor speed and power, and gear ratios, were used to create a numerical model of the current drive system. The friction was inferred from the measured position versus time and the moment of inertia estimate. Motor torque could then be inferred from the top speed, since the net torque on the dome is zero when moving at that constant speed. A DC motor is known to have a linear dependence of torque on rotation rate. A finite difference model incorporating these performance parameters was created to predict the position versus time relationship. This prediction was then compared to measured dome position versus time when accelerating and running at final top speed. An analytical solution to the differential equation describing dome acceleration (based on Newton’s third law) was shown to predict the same behavior as the finite difference model. The analytical solution was then used to predict the amount of time to make each slew. A list of the actual 48-inch telescope pointings over 81 nights of a similar sky survey was used to estimate the average excess above a 10 second slew time allowance. These tools can be used to confidently predict the reduction in observing overheads for proposed motor and gearbox upgrades so that a cost-benefit analysis can be performed for realistic observing scenarios.