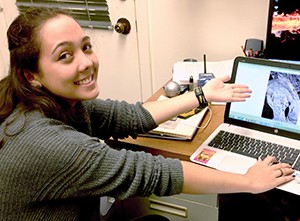 Leila Olivar was raised in Kea‘au on the island of Hawaii and graduated from Kea‘au High School in 2011.  For her first year of college, she attended UH Hilo as a pre-engineering student, then transferred to UH Manoa where she is now majoring in Civil and Environmental Engineering.  She plans to further her education by attending graduate school.  In her free time, she enjoys going to the beach, hiking and spending time with her family and friends.

Project Abstract:  The goal of having mankind returning to the Moon, then venturing toward Mars, will someday become a reality.  Before setting out on this mission, sites here on Earth are being studied for use as analogues for other terrestrial planets and test-beds for planetary exploration.  This summer, our team of interns at PISCES characterized planetary-analogue sites on the island of Hawaii in order to better serve the diverse customers (NASA, CSA, the Japanese Space Agency, the Korean Space Agency, and other Pacific-nation space agencies) with various technology-testing needs.  Such agencies seek to know more about the geological makeup and terrains that would be faced on Mars and the Moon; our team performed geological surveys of sites that were found to be the most similar to both of these bodies.  A second goal is to reduce the cost of sending supplies to both the Mars and the Moon, and to identify resources that humans could rely on to survive.  Utilization of in-situ planetary resources is the primary idea to reduce the cost of sending supplies.  With the testing of various technologies, future explorers will be able to be self-sufficient, and it will make living on Mars and the Moon more efficient.  By characterizing these sites, we can hope to further our understanding of the types resources to be found on both the Moon and Mars, as well as other planets, in order to utilize these materials for scientific and technology use